With European and domestic experiences to successfully alarm for missing children 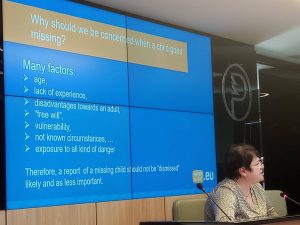 Expert experiences of the fight against human trafficking and the search for missing persons, as well as the necessary conditions and challenges for the successful implementation of an early warning system for missing children, were shared by Lili Sipec, Senior Strategic Advisor at Amber Alert Europe and Christian Mader, President of “Austria will find you” (Österreich findet euch), as well as Sashko Sirachevski and Biljana Lalova, chief inspectors in the National Unit for the Suppression of Migrant Smuggling and Human Trafficking at the Department of Criminal Investigations at the Department for Suppression of Organized and Serious Crime and Baže Dimitriovski, Chief Inspector in the Property and Violent Crime Unit, Department of Criminal Police at the Ministry of Internal Affairs of the Republic of North Macedonia.

Citing statistics on abducted children in Europe, Lili Sipec of Amber Alert Europe said: “Every year in Europe 600,000 people go missing. Half of them are children – 300,000… Statistics on abducted children show that in 76% of abduction cases where a child was found murdered, the child was killed within 3 hours.” Therefore, as the participants agreed, when a child goes missing, there is an urgent need to act, rather than waiting 24-48 hours to file a missing person’s police report, in the meantime all questions about possible causes can be addressed.” 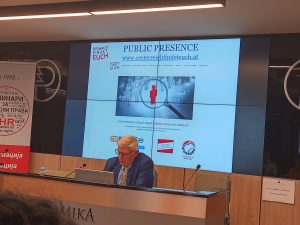 What was emphasized by Christian Mader from “Austria Will Find You” and confirmed by the participants as working in practice, is that the joint efforts of civil society, media and police officers play a key role in the successful outcome in most cases of missing children, so good networking and information sharing is crucial to establishing a warning system, preferably led by police officers, but also managed by non-governmental organizations such as in Austria.

Cooperation with the media was indicated as very important in these cases for the rapid dissemination of information about the missing, especially if digital advertising surfaces are used in public spaces, but also the support of the non-governmental sector. As Sashko Sirachevski from the Ministry of the Interior pointed out, presenting cases of attempted child trafficking, cooperation with non-governmental organizations is very important because it is a sensitive topic in which “there must be a multidisciplinary approach and it is very important not to break the chain so as not to the victim was trafficked.” 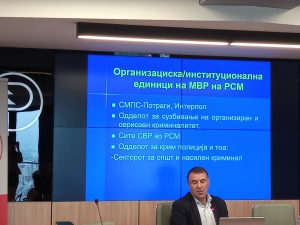 Explaining the procedure when it comes to minors who run away from home or from foster homes for children and youth, Baže Dimitriovski from the Ministry of the Interior emphasized that the most important thing is to submit a written application from the parent, guardian and the institution that is the legal representative, because the urgency of the procedure is in the interest of the child, and later the reasons for the disappearance, which may very often not be arbitrary, can be investigated. For such procedures in which there is no crime, the procedure is more difficult for the pre-investigation procedure, as indicated by Biljana Lalova from the Ministry of the Interior, it is necessary to work with the prosecutor’s office in order to change and facilitate the procedure. She pointed out forced marriages as a trend in child trafficking, especially in certain ethnic communities, and in a recent example, it was a report from a citizen and cooperation with the non-governmental sector that led to the prevention of the attempt and the release of the minor from the chain of child trafficking, after which she she was taken care of by the competent institutions and feels well. 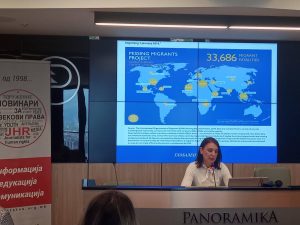 According to the participants, a serious problem is also the lack of a register of “phantom persons”, i.e. children without identity numbers, for whom it is difficult to keep records of whether they have disappeared or just left. That there should be no distinction between disappearances of vulnerable groups and high-profile cases such as kidnapping and ransom demands, and that media interest is sometimes harmful, was the common conclusion of those present. As pointed out, in cases of kidnapping and ransom demand, the family should still leave the work to the police and not arbitrarily take other actions such as paying the ransom or reporting to the media, as this jeopardizes the investigation procedure and successful release. of the child. But even when dealing with cases that have no results in the short term, and when the outcome of the search for the missing child is unfavorable, it is still important to have some kind of epilogue, so that the family also has some resolution in the uncertainty.

The networking of various stakeholders (NGOs, institutions, media), the sharing of data, even if insignificant, and the proactivity of citizens, but also the strengthening of capacities both financially and through trainings, exchange of experiences, preventive campaigns, different approaches adapted to the conditions in each country are what make the missing children alert system a universal tool that can be useful in quickly and safely locating children, and those who disappeared and those who left alone, because they also have risks to life that may not be obvious at first glance. 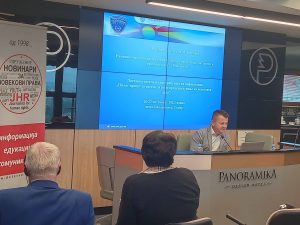 The training is part of a series of activities for the exchange of experiences and the acquisition of new knowledge by all involved parties (public and private sector, civil society organizations, media) in the project whose aim is to improve existing approaches and find new methods for prevention, investigation and mitigation of human and child trafficking, as well as protection or strengthening of the rights of the affected persons.

For this purpose, several activities were carried out, including a one-day training to strengthen the capacity of institutions to identify and direct key innovative techniques for preventing human trafficking (transposition of European legislation, management policies – security of personal data, etc.) , one-day training for journalists covering social rights, one-day training to strengthen the capacities of the target civil society organizations, study visits to Austria for the exchange of good practices for professional staff from relevant state institutions and for representatives of NGOs and journalists, a policy was developed for child protection as well as an online safety toolkit.

The project, which started in July 2021 and will last until December 2022, is implemented in cooperation with the partner organization ECPAT-Austria, and with financial support from the Federal Ministry of Social Affairs, Health, Care and Consumer Protection of Austria, and foresees a series of activities that will conclude with the piloting of the Early Warning System for missing children.