In the period from June 7 to 10, 2022, within the framework of the “Pilot project for the early warning system for missing children”, implemented by Journalists for Human Rights and managed by the partner organization ECPAT-Austria, the first study visit was conducted for the exchange of experiences for institutional representatives from the country.

The study group consisted of: Filip Spirovski – representative of Journalists for Human Rights, Svetlana Cvetkovska – head of the department for equal opportunities in the Ministry of Labor and Social Policy, Emilia Ginoska – junior associate for international cooperation and public relations at the Agency for the Protection of Personal data, Sashko Sirachevski – Chief Inspector in the National Unit for the Suppression of Migrant Smuggling and Trafficking in Human Beings at the Department for Criminal Investigations in the Department for Suppression of Organized and Serious Crime – Ministry of the Interior, and Vasilka Popgjorgjieva – Head of the Department for Legal and General Affairs in the Agency for the protection of the right to free access to information of a public nature, they had the opportunity to familiarize themselves with the processes and programs for reporting, and dealing with missing persons and children.

The first visit started at the Federal Ministry of Social Affairs, Health, Care and Consumer Protection, which financially supports the project. Mr. welcomed us. Harald Fugger, in the afternoon of June 7. By 9:00 p.m., we heard the latest information and gained knowledge about the work of the ministry in all spheres in which it operates. The conclusion was that the ministry invests huge resources for the welfare of citizens, leaving no one behind. The greatest interest in the presentation was shown by Mrs. Cvetkovska Svetlana, head of the department for equal opportunities, at the Ministry of Labor and Social Policy of the Republic of North Macedonia. There was no lack of criticism on its own account, really minor but clear: in relation to the EU legislation and its application by Austria. The meeting was also attended by Astrid Winkler, Sonny Schwartz and Vanessa Moser from EKPAT Austria, a partner organization in the project. Their involvement refers to the organization of trainings for stakeholders divided into three groups: institutions, NGOs and media, as well as the complete organization of the first of the three planned study visits respectively. 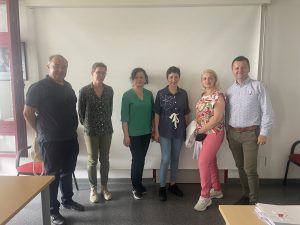 On July 8, we started with a visit to the Federal Criminal Division, where there are 3,600 employees, hosted by Christa Bauer, an officer with 20 years of experience. From the extensive but very precise presentation, we got acquainted with the procedures for dealing with reports of missing persons. Immediate action is taken in case of a report – danger of suicide, due to health reasons or at the request of a parent – guardian. All this seasoned with an excellent information document management system (paperless!) makes the service even more efficient. Cooperation with Eupol and Interpol, whose databases are integral elements in procedures foreseen in advance and precisely, was emphasized. The differences between Vienna and the provinces were also mentioned, the need for more trained police officers, raising awareness of the media to help with programs intended for the general public (TV series, etc.) On the day of missing persons on May 25, every year, the need for more concern of the general public towards them. It was said that a missing person cannot be arrested! It is interesting that people with dementia are also potential missing persons and a special strategy is aimed at them, as well as at teenagers. The transit of unaccompanied minors due to forced marriage is a problem they share with the Airlines, in that context other advertising approaches to search for the missing were also mentioned.

The afternoon session was held again in the building of the Federal Ministry of Social Affairs, Health, Care and Consumer Protection. The presenter was Christian Mader, police officer and president of the association “Austria Finds You”. The presentation gave an explanation of the work of the association that works in the direction of finding missing persons. The working principle is as follows: only after reporting the missing person to the police and filling out the forms there, the association can enter a report in its database, talk to the informant and the family, establish the facts. They maintain constant contact and provide technical assistance to relatives. In the end, they closely cooperate with the police, ie. they also give them information, all with the aim of finding the missing person faster. They have approximately 11,000 applications per year. But sixty are active cases. They do not connect ie. they do not have applications from kindergartens and schools. What was particularly emphasized was the importance of establishing trust. Confidence is the key to success. An imaginary profile of the missing license website was filled out in detail. In addition to the website, the FB page of the organization was also presented, which currently has 27,000 followers.

On  July 9 the morning session was held in the premises of the non-governmental organization Asylum Coordination Austria. The host was Lisa Wolfsager, who explained the situation with asylum seekers, including unaccompanied minors. The largest number at the moment, 70%, are from Afghanistan. They are housed in special centers and are not kept as prisoners. They have the opportunity to move freely. Lisa helps them with legal advice and procedures.
There were 5605 cases in 2021. And until now in 2022 they have 2167 cases. They mediate in determining a legal representative of unaccompanied minors, and in the second phase they also ask for accommodation. Since more than half of asylum seekers move on, they lack a follow-up system. The rights of asylum seekers to bring their families to Austria were also mentioned. Asylum seekers who disappear (in 2021 there were 3123 cases) are not registered as missing persons in Austria, i.e. case is closed! They mentioned it as a criticism, a flaw of the system. 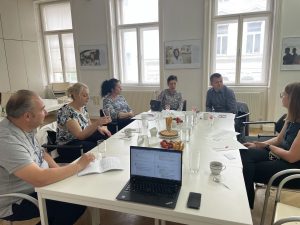 On the last day of the four-day visit to Vienna (it was the most interesting, – note of the participants) in the morning we visited the NGO “Rat auf Drat” in which the sauce line for missing children also works. Brigitte Satke and Christian Zabadi explained their work in detail. They have existed for 35 years, and since 2014 they have been in premises together with SOS Children’s Village. They handle 30,000 calls a year and the team of 8 professionals: psychologists and pedagogues, works 24/7. The most frequent callers are children aged 10-18, but they do not reject anyone up to 24 years of age. Parents also call the online line. 80% children – 20% parents. Boys call more online, and girls more on chat and for advice. About 5% of the calls are from teachers. People understand about their SOS number through advertising on info screens and 3-5 times a week on media in the metro, everywhere for free. (pro bono). The most common reasons for calling are family problems, bullying or suicidal intentions. They have the possibility of a conference call with the police, and they also have access to the calling number. They also have calls from children from asylum centers. The calls are 35% from Vienna, 10% – 15% from upper and similar from lower Austria. The Missing Children Hotline is part of the European Missing Children Hotline and has been run by this 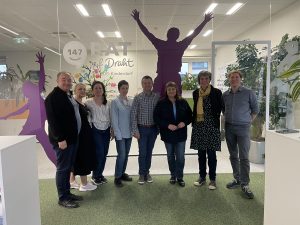 organization since 2012. This system operates in 32 countries. There are 120-140 missing children per year. 90% of them ran away from home, 5% were left in another country and 5% were lost in the subway, etc. The reasons for running away divided into 8 items were also presented. (they will send us this and all presentations) The JHR representative expressed a particular interest in becoming part of this European network and raising things in our country one step higher in terms of quality of life and European legislation and standards.

The afternoon session was scheduled for a visit to one of the twelve homes for unaccompanied and street children, delinquent children and victims of trafficking and prostitution. The conditions in the home were presented by Dominique and Silvia, social workers and responsible for the children staying there. The centers take care of children aged 3-14 years. They act upon a report from anyone about a child’s threatening condition. In Vienna there are also 3 centers for children aged 14-18. Males are

separated from females. The children go to school and have help with their homework. The goal is to return home. That is why psychologists work together with them. It is interesting that the centers are open, ie. they are not locked. They offer a stay of a maximum of 6 weeks, during which the situation should be resolved. The first 8 days they work to get him back home, and then they hand him over to the court for guardianship. Most of the wards are returnees. The residents are satisfied with the centers, they have built trust with the police. For trafficked children, the most important thing is coordination, cooperation with the country of origin. The centers are connected with one information system and this makes their work much easier.