The pilot project – Early Warning System for Missing Children aims to improve existing approaches and find new methods to prevent, investigate and mitigate trafficking in human beings and children, as well as strengthen the rights of those affected by exchanging experiences from countries in the region and Europe, said representatives of the Human Rights Journalists Association during the online promotion of the project.

Aleksandra Radevska, project coordinator of “Journalists for Human Rights” today at the meeting said that for the project to be successfully implemented, they will rely on the Austrian experience, because such a system already exists in Austria, as it exists in many other countries in the world. . According to Radevska, the most famous is the American system where it was first introduced. It is also available in the countries in the region, Greece, Bulgaria, Romania, Italy.

The pilot project – Early warning system for missing children, as Radevska said, in our country will include several activities, including engaging stakeholders through training and exchange of good practices from experiences from Europe and the region, preparation of regulations, improvement of networks and Internet security through innovative techniques, development of online security tools and piloting of an early warning system for missing children.

-Because we notice that more and more children are disappearing, but unfortunately they can not be followed well enough and with dignity, in that situation some of them become victims of violence, exploitation and child trafficking. The reasons are poverty, unemployment, domestic violence, which are a little harder to follow in this period of pandemic, and here the most affected are certainly certain marginalized groups, added Radevska.

She added that groups of the Roma population are particularly at risk of being trafficked, and that the use of digital devices, which increased during the pandemic, is also a risk of abuse.

Partly due to the lack of knowledge in digital tools management, the risk of children being abused through online media and being recruited for child trafficking is increasing, which is again a significantly higher risk for children from vulnerable categories. We, as project partners, initiated to work together to protect children from disappearance and to prevent harm to those affected, said Radevska.

As mentioned, the exchange of knowledge with all stakeholders at the institutional level, as well as the sharing of experiences from Europe will help to identify and direct key innovative tools, such as early warning systems, to improve digital literacy, and some innovative tools in that segment, child protection policies, to work with children as public actors, but also the need for cross-sectoral cooperation.

-Our legislation in this segment has not yet been transposed into European human trafficking legislation. We are one of the countries in the region that does not have mechanisms and systems for early warning of missing persons, added Radevska.

Astrid Winkler, from the partner organization “ECPAT Austria” today at the meeting said that she hopes that this project will be successful, and as she said, when it comes to topics of this kind, the cooperation of various stakeholders is crucial.

In Austria we focus on campaigns, awareness raising, research and networking which are very important. We will share important practices from Austria, but the main information is from Human Rights Journalists. We have centralized anti-trafficking bodies, but also expertise on all issues related to human trafficking, and we are also working on the introduction of a specialized center for child trafficking, said Winkler.

The representative of the Federal Ministry of Social Affairs, Health, Care and Consumer Protection, Harald Fugger, indicated that he supports this initiative and noted that it is challenging, but with the involvement of all stakeholders, it will be very successful.

– I support this initiative, congratulations on the implementation of the project, it is always challenging, but I am sure that all institutions will give their input and that the project will be successful. We will not be able to realize this project if we do not have the support and cooperation of all institutions, Fugger emphasized at today’s opening meeting.

The initiative was supported by other participants in the meeting, representatives of the Ministry of Interior and the Bureau of Public Security, the Ministry of Health, the Ministry of Labor and Social Policy, the Agency for Protection of the Right to Free Access to Public Information, experts on children, as well as non-governmental organizations working on the protection of children’s rights in the country.

According to them, the process of exchange of experiences, but also the cross-sectoral cooperation is needed to improve the existing systems for combating child trafficking, and the involvement of the media should be one of the main tools in this process of establishing an early warning system for missing children. .

The pilot project is implemented in partnership with “ECPAT Austria”, and started on July 1 this year and will be implemented until December 31, 2022. It is financially supported by the Federal Ministry of Social Affairs, Health, Care and Consumer Protection. 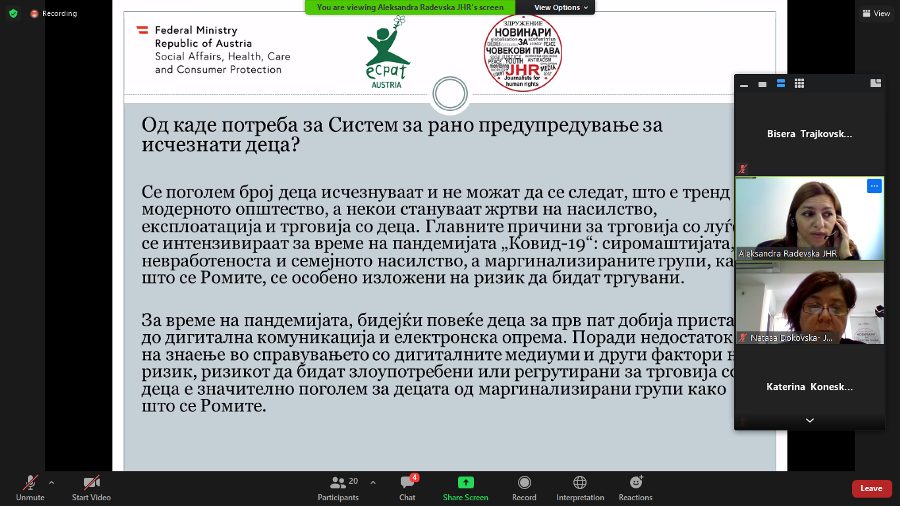