In the period from July 4 to 7, 2022, within the framework of the “Pilot project for the early warning system for missing children”, implemented by Journalists for Human Rights and managed by the partner organization ECPAT-Austria, the second study visit was conducted for the exchange of experiences for representatives from NGOs and the media from the country. 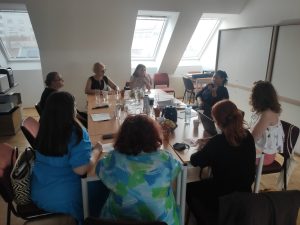 The study group consisted of: Aleksandra Radevska – representative of Journalists for Human Rights, NGO representatives Maja Acevska from the “Hope” Crisis Center, Andrea Nakova from “The Hidden Hero in Every Child”, Aleksandra Efremovska from the “Nadez” Center for Social Initiatives, and the journalists Maja Dankovic Batkoska from radio “Leader” and Bjanka Stankovic from the multimedia platform “Vidi Vaka”, had the opportunity to get acquainted with the institutional side of the social system in Austria, with the work of non-governmental organizations in the field of children’s rights, the support of child victims of trafficking with people, as well as with the work of the media on these topics.

The second visit began on July 5 at the Intervention Center for Trafficked Women LEFO – IBF, where Isabella Chen presented the work of the organization which is a member of the Austrian Working Group to Combat Human Trafficking, the EU Platform for Civil Society, the European NGO Platform La Strada International, as well as the Global Alliance Against Trafficking in Women.

The association formed by and for migrant women founded in 1985 by Latin American women living in exile in Austria, is a pioneer in working with migrant women sex workers and women affected by human trafficking. LEFO is still the only organization in Austria that provides a wide range of counseling and support for migrant women and advocates for their rights, cooperating with institutions, the non-governmental sector and the media. The participants were particularly interested in the cooperation with the media, but also in the way the support offered to the victims is communicated on social media in order to make the services as accessible as possible to those who need them the most. For this purpose, LEFO offers its information and services in 8 languages, and as indicated last year, it offered support to clients from 40 countries. 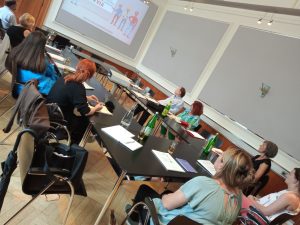 In the afternoon, the study meeting participants had the opportunity to learn about the work of MEN VIA, an organization that advises and cares for male victims of human trafficking since 2013, through a presentation and discussion with the organization’s director, Manfred Buchner. Sonny Schwartz and Vanessa Moser from EKPAT Austria, a partner organization in the project, also attended the Wednesday. As indicated, MEN VIA is the only one in Austria specialized in the protection of male victims of human trafficking, and it has institutional support for this. As Mr. Buchner pointed out, men are trafficked in various sectors, especially where there is low pay and the work is dangerous and unhealthy: construction, gastronomy, cleaning, agriculture. But, as he pointed out, men are also exploited as beggars, forced into prostitution or committing criminal acts. The help provided by MEN VIA includes advice, safe accommodation, support in legal, medical, psychological and social issues and support in planning for the future, and around 20 men use their shelter each year. Buchner also introduced the attendees to the campaigns they implement to raise awareness and identify victims of human trafficking, as well as cooperation with the media and court cases that had a positive resolution. 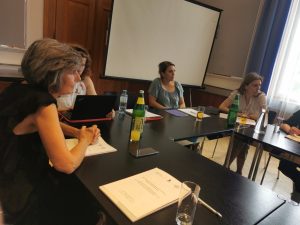 On July 6, Mag. Harald Fugger, attache of the Federal Ministry of Social Affairs, Health, Care and Consumer Protection of Austria made an introduction to the social system in Austria, The conclusion was that the ministry invests huge funds for the welfare of citizens, and also offers some special measures for pensioners such as rehabilitation and the Fit2Work measure, parental leave, employment of persons with disabilities, career counseling for young people… However, self-criticism and room for improvement were indicated in some segments regarding EU legislation and implementation by Austria.

The afternoon was reserved for a meeting and exchange of experiences with journalists Nina Horacek from the falter.at , newspaper, Zoran Dobric from ORF television and Edith Meinhart from the weekly Profil who were very interested in sharing theirs, but also hearing experiences about the situation with child trafficking. in North Macedonia. They generally share the same attitude that social topics (trafficking in people and children, missing children, labor and sexual exploitation) are not the main topics for media houses with the explanation that there is not enough budget for the research that these topics usually require. They also shared their experiences in the process of obtaining information, which is usually difficult, and that they have the greatest cooperation with the non-governmental sector, usually with media or journalists whom they trust. Cooperation with the police is unfortunately complex, partly because most of the information is confidential, they say. At the meeting, the common idea for cooperation and networking of journalists from both countries, as well as education of journalists and support for dealing with trauma during reporting. 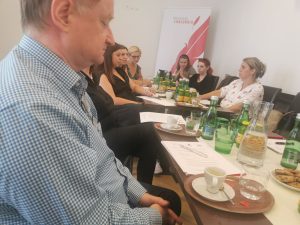 The last day of the study visit was reserved for two meetings, the first of which was with M.Sc. Robert Bauer of the Federal Department of Labor, part of the Human Trafficking Working Group on Labor Exploitation. The Human Trafficking Working Group on Labor Exploitation reports every three years on the cases recorded in Austria as a country of transit, but also a destination country of human trafficking. As it was pointed out at the meeting, the biggest problem in the control of labor exploitation is in the sector of domestic work, home care, nannies, construction and agriculture, and numerous legal amendments should be adopted to improve the control in these sectors. It was interesting to note that the sector of work of nannies or young girls who come for cultural exchange – to learn a language while looking after children (au pairs) has many shortcomings in legal control. Since there is no legal definition of exploitation, but indicators such as poor living conditions, confiscated documents, overtime, low wages, behavior have to be checked, it is always difficult to detect. The largest number of nannies come from Eastern Europe, and in 2016 there were 10-15 from North Macedonia, Bauer pointed out. The fact that people coming from the European Union do not have any data that they work as nannies was also interesting for those present, so there is no possibility to control their work contract or work permit, i.e. violation of their rights.

The afternoon meeting was scheduled in Drechscheibe – Crisis Center for Unaccompanied Foreign Minors, where Paulino Menendez, from the Center for the Welfare of Children and Youth at the City of Vienna, explained to those present the work of crisis centers – those that are divided by gender and take care of children aged 15 up to 18 years there are 4 in the city, crisis centers for children from 4 to 15 years old are apartments where children stay with 6 teachers, while children up to 3 years old are cared for by crisis parents (persons who have undergone training for a period of 1 year) . As the lowest level of care that exists for minors, day shelter centers were indicated, which offer emergency overnight care for youth from 14 to 18 years of age, and which are obliged to notify the child and youth welfare center in each case.

Dominique Ritter, an employee of the Drechscheibe – Crisis Center for Unaccompanied Foreign Minors, described the 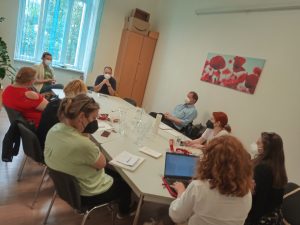 conditions at the center, which has room for 10-12 children who are housed in separate rooms for girls and boys aged 14 to 18. He explained the principle of working with minors, pointing out that language is the main obstacle in the initial communication when they are brought by the police or report themselves to the center. For that, there is a service of translators who facilitate communication with online translation, but giving clients the assurance that nothing will happen to them and gaining trust is the most important part of the dating process. He pointed out that they have 10 cases of trafficked children per year, although the real number is probably much higher, but unfortunately it does not reach them. Most are girls, victims of child trafficking for sexual exploitation or pickpocketing. Less than 10 percent of trafficked children stay in Vienna, most of the time they return home, but the process of resocialization is difficult because in large part the families are part of the trafficking chain. As indicated, most of them do not identify themselves as victims, and the main domain of work should be the stabilization of the social system in Eastern Europe in order to reduce the number of trafficked children from this region.