In the period from September 12 to 15, 2022, within the framework of the “Pilot project for the early warning system for missing children”, implemented by Journalists for Human Rights and managed by the partner organization ECPAT-Austria, the third study visit was conducted for the exchange of experiences for institutional representatives and experts from the country.

The study group consisted of: Aleksandra Radevska – representative of Journalists for Human Rights, Biljana Lalova – chief inspector in the National Unit for Combating Smuggling of Migrants and Human Trafficking at the Department for Criminal Investigations, Department for Suppression of Organized and Serious Crime, Ministry of Internal Affairs, Nermina Faković – Ministry of Health, Monika Čekalović – Social worker at PI for taking care of children with educational-social problems and disturbed behavior-Skopje, Liridon Baftigi – Director of the Intermunicipal Center for Social Work in the city of Skopje, Liridona Bushi – Ministry of Education and Marjan Delevski – independent IT expert, had the opportunity to get acquainted with the institutional side of the social system in Austria, the activities of municipal and police structures, the work of non-governmental organizations in the field of children’s rights, the support of child victims of human trafficking, as well as the coordination of various stakeholders in guaranteeing safety and well-being of the children.

The visit started with a meeting with Mag. Harald Fugger, attaché of the Federal Ministry of Social Affairs, Health, Care and Consumer Protection of Austria who reviewed the welfare system in Austria. Particularly interesting for those present were the facts that the ministry invests huge funds for the well-being of citizens, and also offers some special measures for pensioners such as rehabilitation and the Fit2Work measure, parental leave, employment of people with disabilities, career counseling for young people… 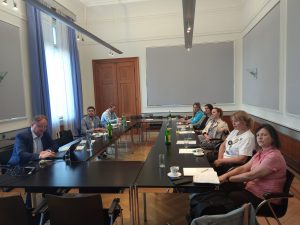 In the afternoon again at the Federal Ministry of Social Affairs, Health, Care and Consumer Protection of Austria, the delegation had the opportunity to meet with Alina Seel, Head of Department for Family Law Policy and Children’s Rights at the Federal Office, Sebastian Ohner from the Office of the People’s ombudsman for children and youth of Vienna and Sabine Skop from the public relations office of the Children and Youth Services of the City of Vienna.

Alina Seel gave an overview of the work of the Austrian working group on child trafficking and the national referral mechanism, and Sebastian Oner also addressed the media part, i.e. sharing information with the media but also with students in schools about the rights they have through workshops and projects, as well as the importance of cooperation with the non-governmental sector. He mentioned safe housing as part of the strategy for children and youth of the city of Vienna. Sabine Skop mentioned that reports of violations of children’s rights mostly come from schools, but also from the police after reports of domestic violence, where the largest percentage of children are victims of neglect, and a smaller percentage of psychological, physical and sexual violence.

Particularly interesting for the attendees was the shared practice for working groups of these institutions, together with the police, and other experts, in which for six weeks the work is discussed and coordinated and resources are shared to find the best systemic solution for each child as soon as possible. 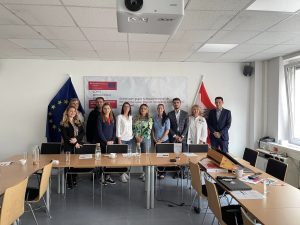 The next day the delegation visited the Federal Ministry of the Interior where Kerstin Kreutzer from the Criminal Intelligence Service of Austria, presented the work of Section 8 – Trafficking in Human Beings, Smuggling and Special Investigations, Section 8.2.1 – Trafficking in Human Beings, JOO – Joint Operational Office and the Working Group on Trafficking in Persons and Children. Those present had the opportunity to hear details about the way telephone communication is monitored, who are the victims of the highest risk, the work of the line which is available 24 hours, but also anonymous reports via email, as well as for specific cases of organized abuse of children who were successfully resolved without children’s testimony. The open approach of the Ministry of Interior with non-governmental organizations as well as with the public was seen as an excellent example of institutional work that should be followed. 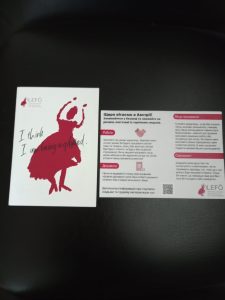 On the last day of the study visit, the Intervention Center for Trafficked Women LEFO – IBF was also visited, where Isabella Chen presented the work of the organization which is a member of the Austrian Working Group to combat human trafficking, the EU Civil Society Platform, the European NGO Platform La Strada International, as well as the Global Alliance Against Trafficking in Women. The association formed by and for migrant women founded in 1985 by Latin American women living in exile in Austria, is a pioneer in working with migrant women sex workers and women affected by human trafficking. LEFO is still the only organization in Austria that provides a wide range of counseling and support for migrant women and advocates for their rights, and for this purpose cooperates with institutions, the non-governmental sector and the media. The participants were particularly interested in the work during the Covid crisis, the support offered to victims in order to make services as accessible as possible to those who need them most, but also in the way interviews with victims are carried out in the police and the challenges in working with disabled victims. LEFO offers its information and services in 8 languages, and as indicated last year, it offered support to 334 women and girls from 40 countries.

In the afternoon, the study meeting participants had the opportunity to learn about the work of MEN VIA, an organization that advises 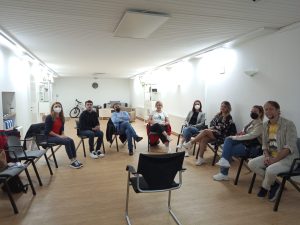 and cares for male victims of human trafficking since 2013, through a presentation and discussion with the organization’s director, Manfred Buchner. The meeting was also attended by Astrid Winkler from ECPAT Austria, a partner organization in the project. As indicated, MEN VIA is the only one in Austria specialized in the protection of male victims of human trafficking, and it has institutional support for this. As Mr. Buchner pointed out, the trafficking of men is mostly for labor exploitation and they have about 60 clients a year, and it is carried out in various sectors, especially where there is low pay and the work is dangerous and unhealthy: construction, gastronomy, cleaning, agriculture. But, as he pointed out, men are also exploited as beggars, forced into prostitution or committing criminal acts.
The help provided by MEN VIA includes advice, safe accommodation, support in legal, medical, psychological and social issues and support in planning for the future. Buchner introduced the attendees to the court cases that had a positive resolution, and mentioned that cooperation with other institutions and non-governmental organizations is also very important, so 4 people who were victims of labor exploitation were sent to them from the centers for the homeless. Therefore, as he mentioned, raising public awareness is also of great importance, as well as improving the system of punishments, because as he pointed out in certain examples, those accused of labor exploitation in the construction sector find a way to continue working despite the sentences imposed.

All the presentations and discussions conducted during the study visit for the institutional representatives were very useful in building capacities to fight human trafficking, with a focus on children and supporting those affected, as well as knowledge on dealing with missing persons/children and finding new ways to improving the well-being of children in general. Sharing what worked and also what didn’t was welcomed as a way to improve and find new ways to move forward, also to realize that sometimes progress is made one step at a time. Examples of ways of collaboration and networking between different stakeholders working on child welfare, for example by holding regular coordination meetings were highlighted as a good example to follow in order to improve trust, inter-institutional coordination but also save time and resources when they are limited to achieve the best interests of the child in the shortest possible time.